Graph databases store and manage the relationships (edges) between different entities (vertices). Here is an example of a simple graph:

What are graph databases?

A simplified social network represented as a graph (original image from the Amazon DynamoDB Storage Backend for Titan documentation).

Graphs can be used to model social networks, gaming networks, master data, recommendations, logistics, genomics, fraud, geodesy, maps, networks and workflows, to name a few. Both vertices and edges can be typed; some vertices could be people as in our example, and others categories of popular items. Similarly, some edges could denote friendship relationships, and others could denote “likes” relationships (as above). Graph databases that support directed property graphs all allow properties to describe vertices and edges, often in the form of name-value pairs. Once a graph has been built, it is processed by traversing the edges between the vertices. In the graph above, we could traverse from Justin to Anna, and from there to Books.

Titan is a scalable graph database that is optimized for storing and querying graphs that contain hundreds of billions of vertices and edges. It is transactional, and can support concurrent access from thousands of users.

Titan’s pluggable data storage layer already supports several NoSQL databases and key-value stores. This allows you to choose the backend that provides the performance and features required by your application, while giving you the freedom to switch from one backend to another with minimal changes to your application code.

The backend works with Titan version 1.0.0. This version supports fast traversals, edges that are both directed and typed, stored relationships, vertex partitioning, vertex labels, user defined transaction logs, and more. The backend did not make any changes to Tupl to support it. You are simply using Tupl as an efficient way to store your graphs.

Version 1.0.0 of Titan is compatible with version 3.0.1-incubating of the TinkerPop stack. TinkerPop is a “graph computing framework for both graph databases (OLTP) and graph analytic systems (OLAP)”.

Since I am talking about graphs, I should illustrate all of the items that I have talked about in the form of a graph! Here you go: 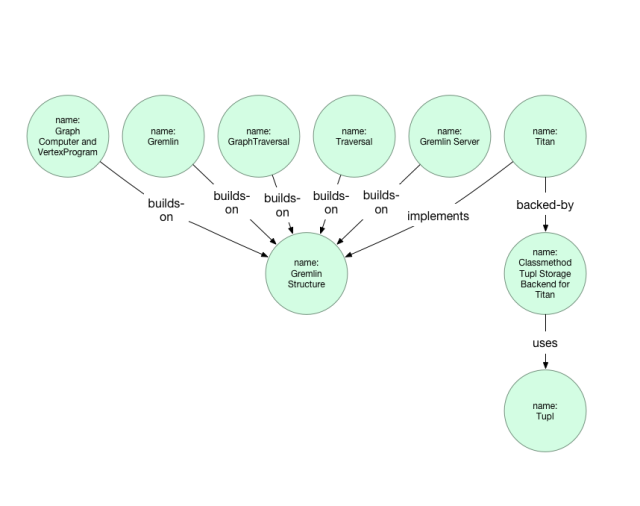 This graph shows the relationships between the various software elements of TinkerPop, Titan and this storage backend.

I created the following Gremlin script. It replicates the graph above using the Classmethod Storage Backend for Titan.

I re-ran some of the experiments described in Beis, Papadopoulos and Kompatsiaris’ paper to compare the performance of this storage backend with other Titan backends and Neo4J. First, I ran the Massive Insertion Workload (MIW) on Titan-BerkeleyDB, this storage backend and Neo4J. MIW only commits once, after all the vertices and edges are loaded. Other performance optimizations are also employed on the Neo4J and Titan sides. For Titan, this involves using custom vertex ids, turning on the batch-loading option, and turning off transaction support. For all databases, a vertex cache keyed on the vertex id is employed to speed up edge creation. 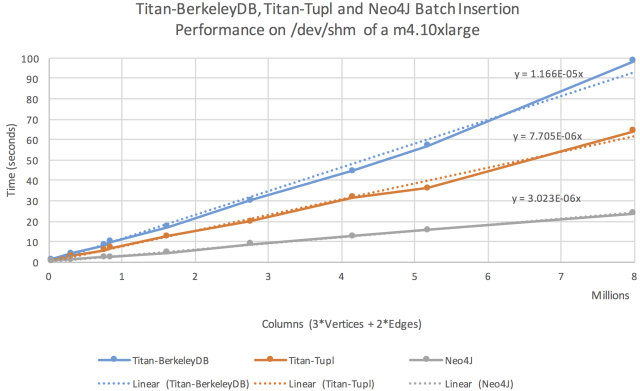 I ran the MIW on /dev/shm of an m4.10xlarge EC2 instance. I graphed the performance of each graph database for the MIW as a function of columns. Execution time appears to be linear in the number of columns, so I used least squares to graph a linear approximation for each graph database. A column is a piece of information (a vertex, a vertex property, an edge, and Titan composite index entries) that relates to a particular vertex. The “column” parlance is an artifact of the Titan KCV implementation of edgestore and graphindex tables. I multiply the number of vertices for each graph by three because one column corresponds to the vertex itself, another to the ID property and a final for the index entry in the ID index for that vertex. For each edge, there is one column in the intended direction and one column for the opposite direction, absent configuration options to the contrary. For the MIW, the Classmethod Tupl Storage Backend for Titan appears to be around 1.5 times faster than Titan-BerkeleyDB, and Neo4J appears to be approximately 2.5 times faster than the Classmethod Tupl Storage Backend for Titan.

Second, I measured the storage footprint of each of these databases when the graphs are persisted in the MIW. 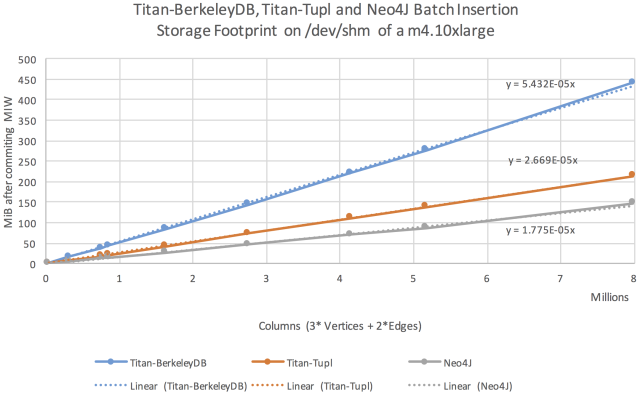