What are Scheduling Algorithms?

According to the degree of multi-programming, we try to keep multiple processes in the ready queue before sending them for processing. Ready queue is present inside RAM. We use different algorithms in operating system to execute processes in effective and efficient manner. These algorithms are known as scheduling algorithms.

Scheduling Algorithms are the ways of selecting a process from ready queue and put it in the CPU.

There are two main categories of scheduling algorithms- 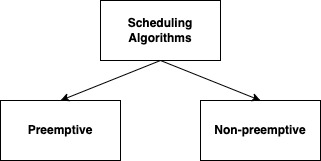 A process already in running queue can be sent back to ready queue. That process remains in ready queue till it gets its next chance to execute.

In this method, processes are executed which are closest to completion.

The process with the maximum remaining time gets executed first

A process already in running queue will not be sent back to ready queue until and unless it is completed. In this case a process running in CPU does not interrupt in the middle of execution.

The process which requests CPU first gets CPU allocation first.

The process with the shortest running time should be chosen to run next.

This algorithm is based upon the fact that the process with the largest burst time is processed first.

The CPU is assigned to the next process that has the highest response ratio.

This algorithm divides the queue into several separate queues. In this method, processes are assigned to queues based on certain properties of the process (process priority, amount of memory, etc.).

The point of time at which a process enters ready queue.

The time duration required by a process to get executed on CPU.

The point of time at which a process completes its execution.

It is the sum of times spent by the process waiting to get into memory, waiting in the ready queue, executing in CPU, and waiting for I/O; i.e. how long it takes to execute a process. {Completion time}-{Arrival time}

It is the time spent by a process waiting in the ready queue. {Turn around time}-{Burst time}

Thank you for reading!