No worries people, the event was a total success. Phew! 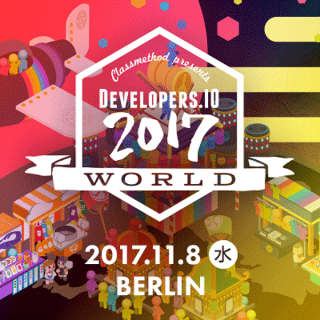 Developers.IO 2017 World was advertised on Eventbrite, and Facebook under the title “Making Sushi With AWS”. Our Managing Director, Masanari Higashi, gave the main talk that inspired the title for the event. Unfortunately since none of us are sushi masters, we couldn't provide our guests with actual sushi.  So we gave them sushi erasers instead. :) 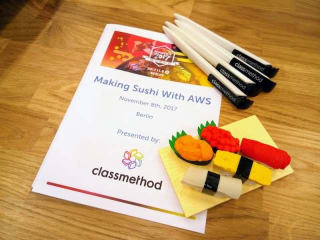 On Wednesday morning at 9:30 a total of 12 guests, 2 guest speakers and the entire Classmethod Europe team gathered in one of the seminar rooms of the AWS building located on Krausenstr. The room was full! 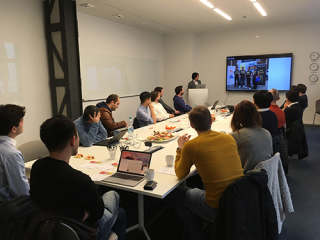 Every seat was taken. (That empty seat was mine..)

Over the course of three hours, four presentations were given along with breakfast for participants to enjoy. 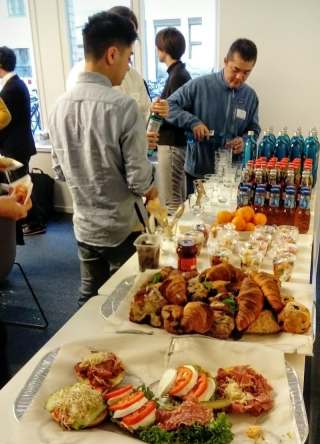 Breakfast! Because everybody loves free food ;)

Here is a list of the talks in the order they were given:

How Can We Revel in the cloud and Propel the Business

Big Data Insight: How Tableau Can Help You With Big Data Stored on AWS -

Lessons Learned from Building a Billing System on AWS

Protecting Your Applications and Data in AWS -

There was a brief intermission after the first two talks for guests to get a second cup of coffee, walk around, stretch their legs, or discuss the content etc.

Brief Descriptions of the Presentations

The presentations exhibited the different ways that companies can utilize AWS to achieve an exceptionally high level of success.

The first talk given by Mr. Masanari Higashi introduced guests to Classmethod and shared some of the company’s strongpoints.  Mr. Higashi gave the example of Classmethod’s case study of Sushi-ro, a revolving sushi restaurant chain in Japan.  His talk showed how Classmethod in partnership with AWS technology helped to revolutionize and enhance Sushi-ro’s business and sushi production. 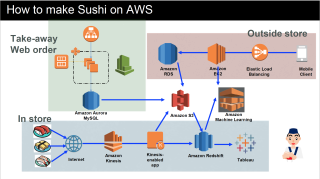 The second talk Big Data Insight: How Tableau Can Help You With Big Data Stored on AWS -  by Mr.Lennart Heuckendorf showed atendees how Tableau software can quickly analyze massive amounts of data collected by AWS, and produce helpful visuals with up-to-date statistics that help businesses improve efficiency. His talk consisted of demos and real-life case studies.  One of his demos showed how Tableau software helped a bike renting company in N.Y. pin-point peak times of pick-ups and drop-offs, and where in Manhattan the most rentals and drop offs were taking place. 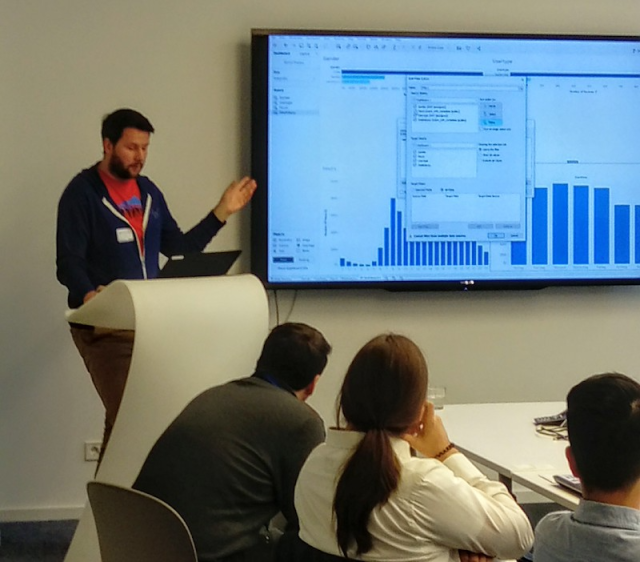 Lessons Learned from Building a Billing System, by Mr. George Yoshida of Classmethod, covered projects that he over saw and challenges he faces as a Chief Solutions Architects.  Some of his challenges include finding ways to provide clients a consistent quality service, while keeping up to date with the latest AWS products.  He also highlighted various AWS technologies which he works with such as AWS CloudTrail and Amazon Athena.

Last but not least was Protecting Your Applications and Data in AWS by Mr. Stefan Rehberg of Trend Micro. Trend Micro is a global security software developer.  It provides cloud security for Amazon AWS as well as Microsoft Azure and VMware.

Mr. Rehberg talked about how security is designed, and how it is threatened on a daily basis. He used Target as a starting example, showcasing how it was possible for such a large company to not notice a breach in their data until very late.  He also gave a theoretical example of a company with fake characters to demonstrate how a team might combat such threats with AWS products such as IAM in combination with Trend Micro. 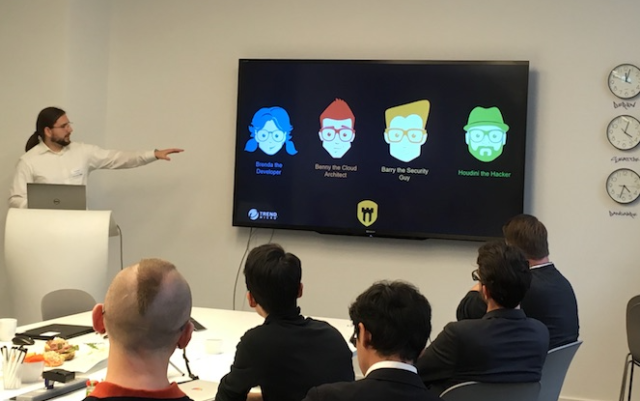 Participants who attended Making Sushi With AWS hopefully left with one clear message - which is: There is no limit to the different ways that AWS, and their Partner Networks, can improve your business' efficiency and incorporate the most cutting edge cloud technology into your company's daily operations.