4 Things No One Tells You About Git

In any SDLC task or Devops task, working with version control is inevitable.

This blog talks about the everyday use cases with git which every developer or DevOps engineer will likely face during their projects and the purpose of this blog is to help you learn from my experience which I faced when I started working. ( I learned it the hard way, hope it helps in your learning journey) 🙇

In the end, please check out how DevOps engineers use git for their day-to-day tasks.❤️ 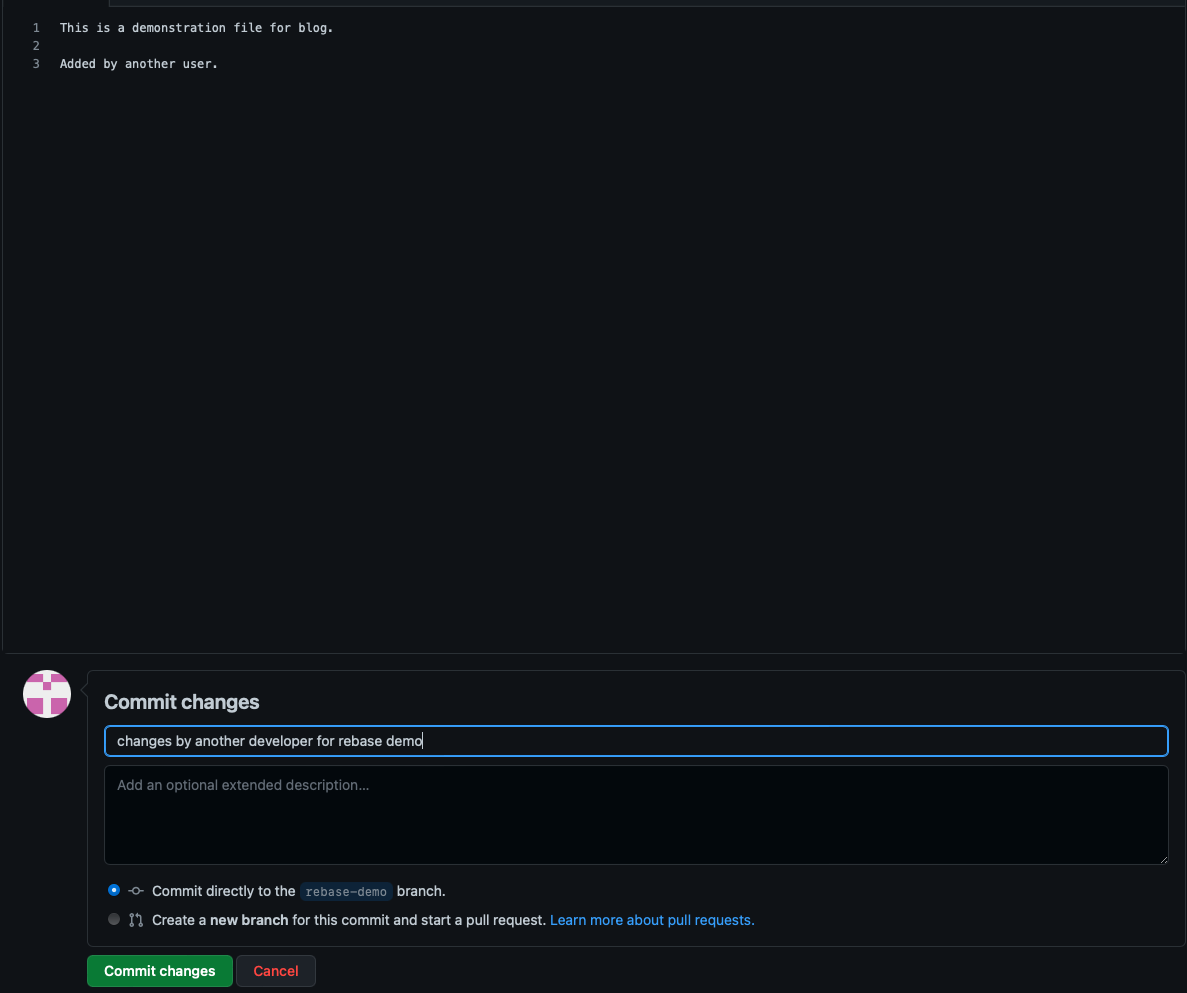 A Bad Solution: Running git push -f on your local would definitely solve the issue but it will surely mess up your commit history and overwrites other users' commit. 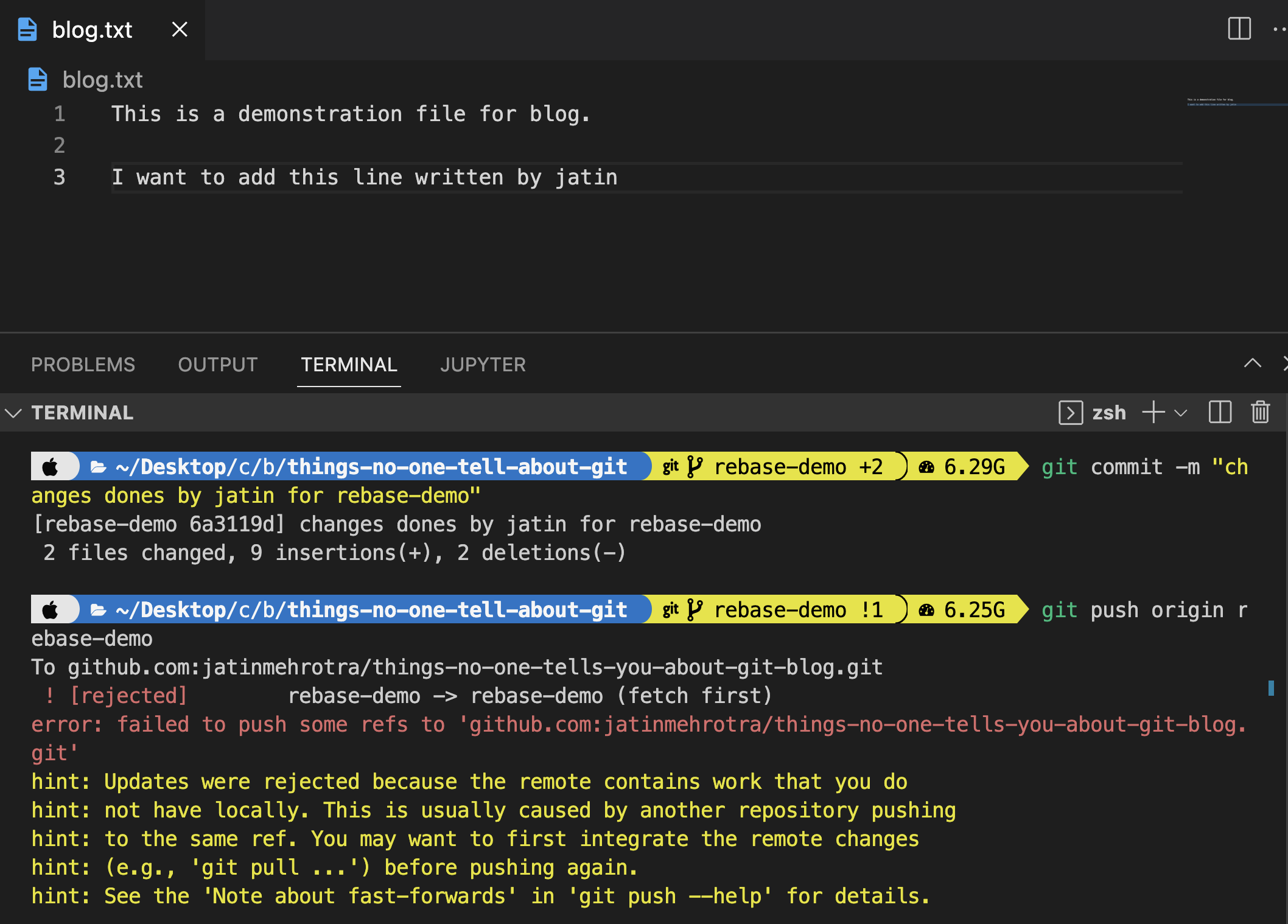 Solution: Do a rebase. It pulls changes from remote and stacks our local changes on top of that, hence avoiding an extra commit and leading to cleaner commit history. 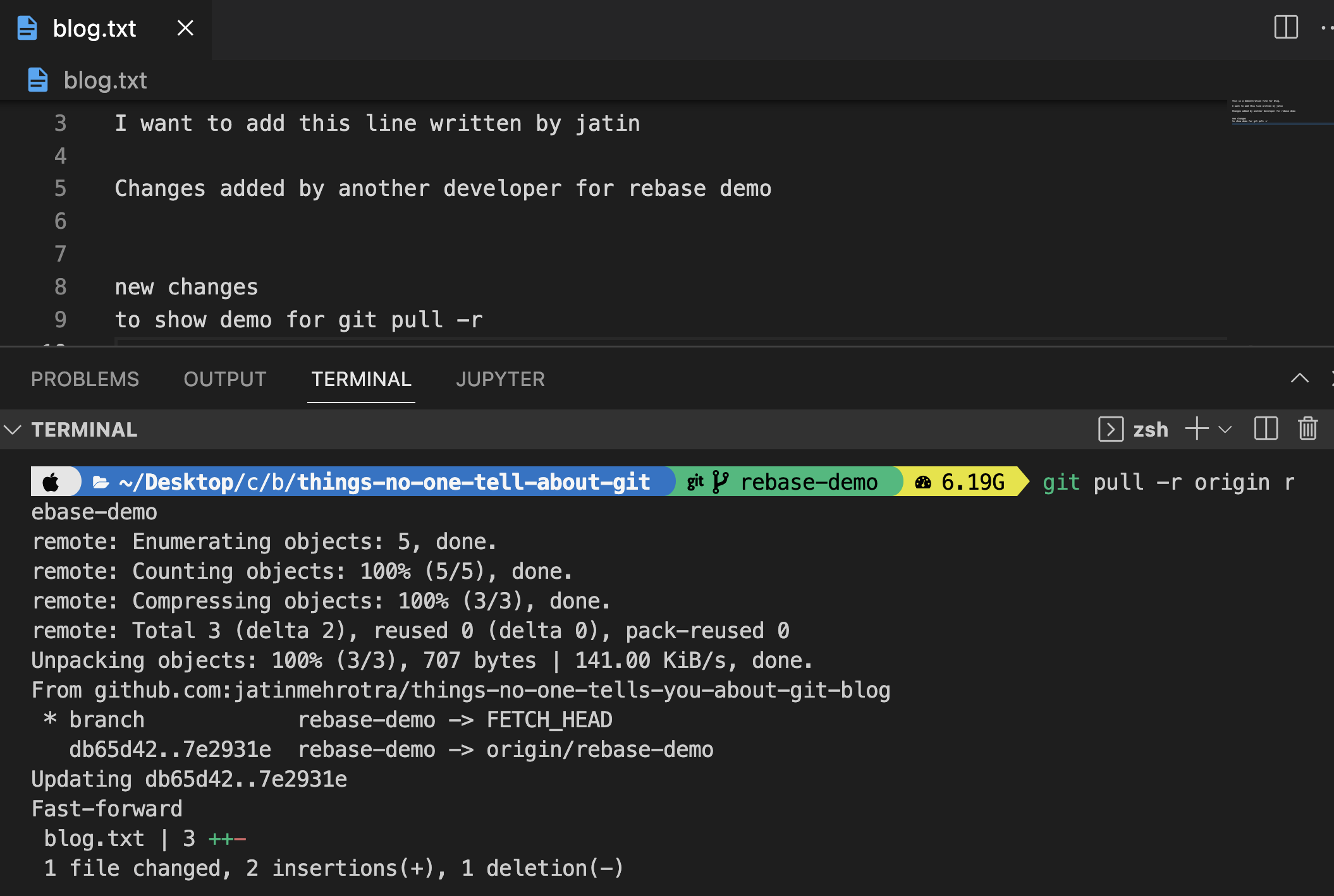 Scenario: We don't know which commit caused the bug, in order to find the cause and perform our testing to ensure the bug was caused by a particular commit, git allows us to go back in time; to go back to that specific version of the project i.e to checkout the commit which is in question.

Solution:- Git allows us to view the history of a commit using the git log command and using the hash of the commit we can checkout to a specific time in code and verify/test the cause.

Scenario: There are so many ways to undo a commit, google pulls a lot of different posts on StackOverflow but which one to use for which case? Let's demystify this.

Solution: Either use reset, amend or revert commands.

Let's make some bad changes and try to fix them.

Scenario: Now I don't want to delete the changes, but instead fix them or change them, for such a use case --soft will be used. Let's make some changes and fix them with the --soft option

Solution:- reset --soft simply deletes the commit from the commit history and stage the commit which allows us to edit or fix them. 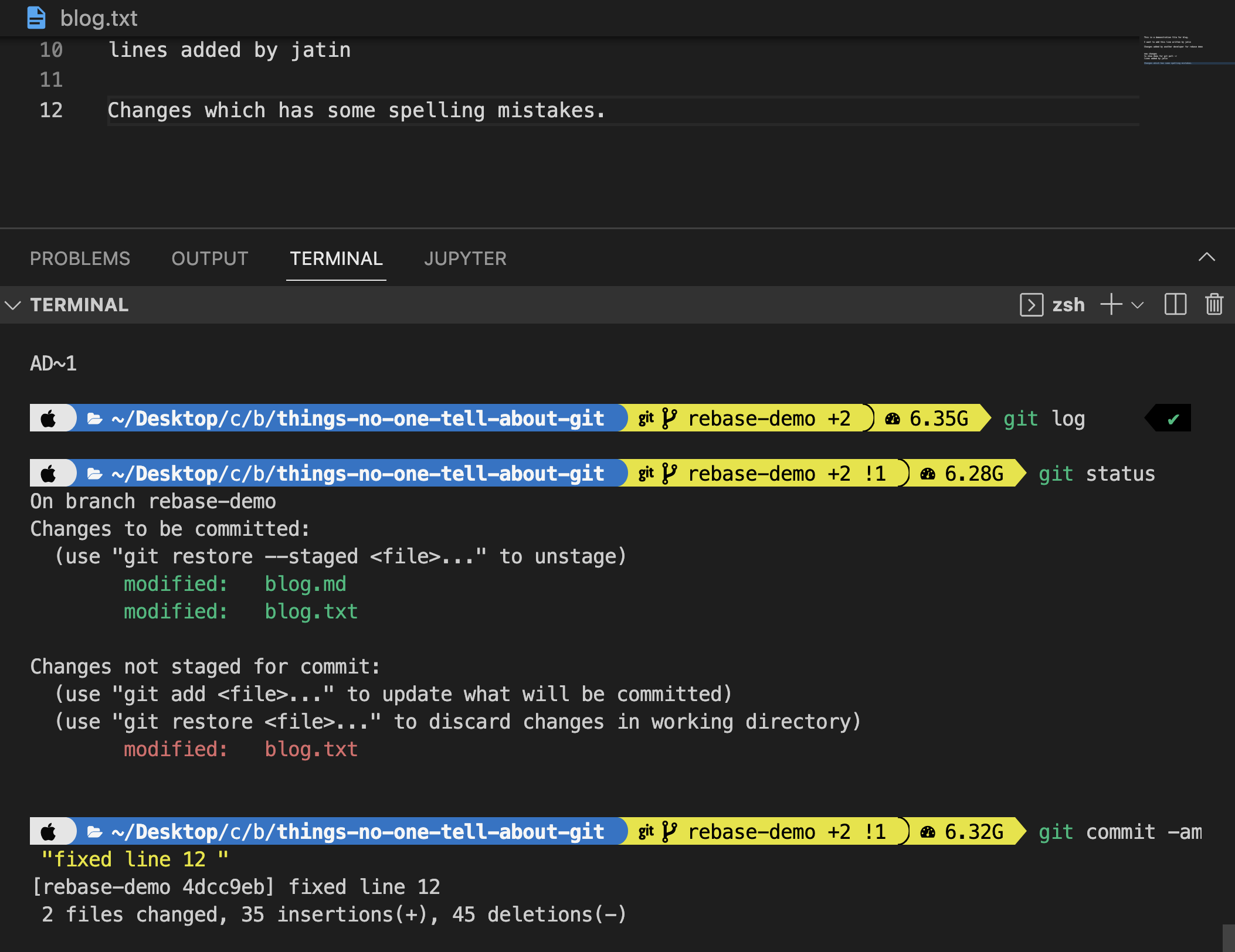 Scenario: There are some more changes which need to be done and they belong to the previous commit, instead of adding a new commit or doing git reset --soft and then committing again we can simply amend the commit.

Solution:- Just add them to the staging area and use the amend option. 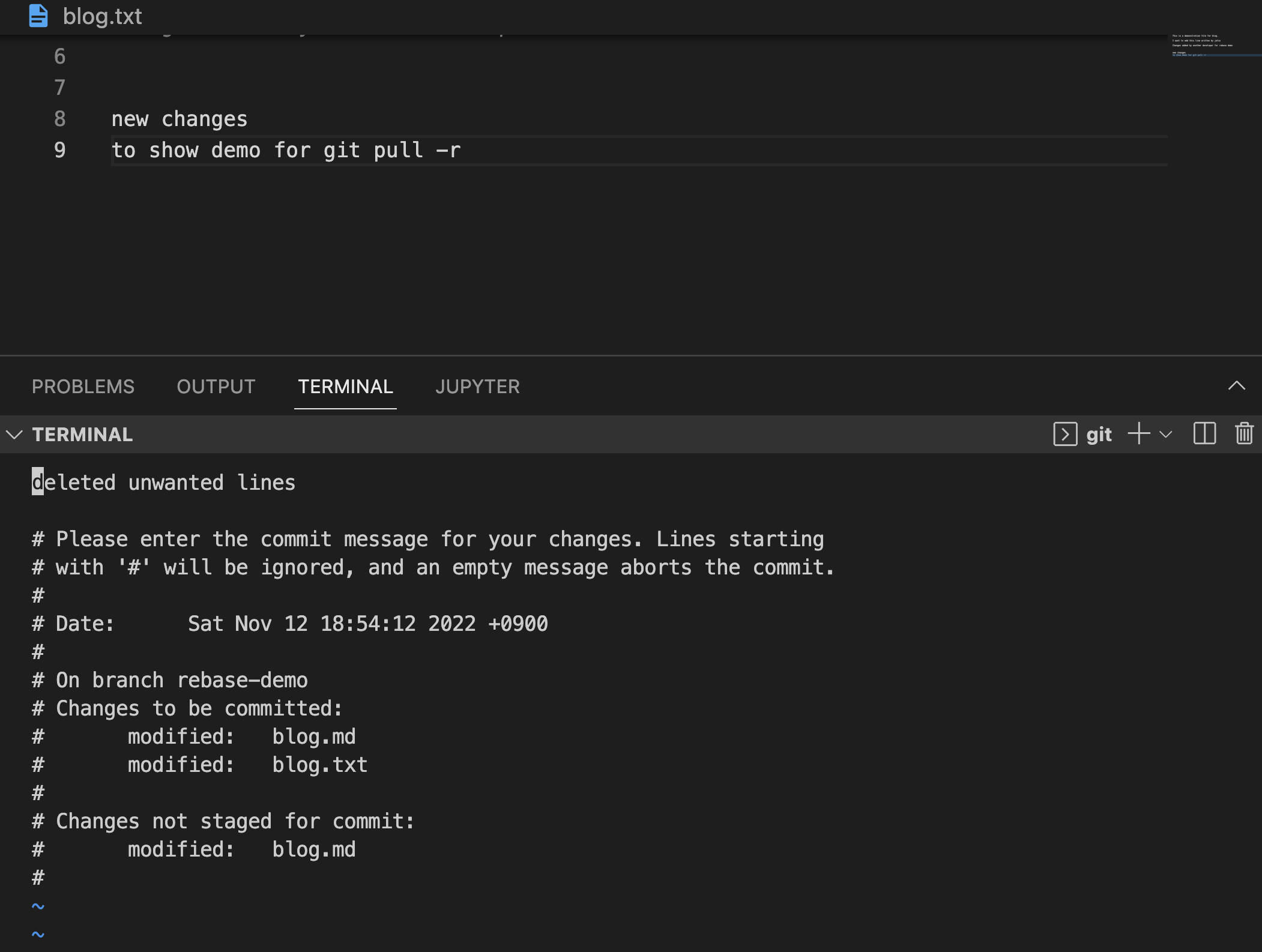 Scenario: Your changes are in remote and now you want to revert them in remote, use git revert which creates a commit in commit history to undo the previous commit. It uses a hash of the commit which is being reversed.

4) Remote file added to .gitignore is still being tracked by git

Scenario: There is a file which exists in remote and we want to remove it from being tracked in other words ignore it.

Solution:- Because it is already committed to remote, git is tracking it, so every change in the file will be tracked by git. To solve this remove it from cache.

- if we push our changes, we can see the file is removed from the remote.

Till then, Happy Learning!