Hey there! Classmethod (Europe) GmbH went to Cologne in order to attend the AWS Transformation Day. On October 26th, we traveled as a team of four from Berlin to Köln (Cologne) on one of the last Air Berlin flights. Here is a quick summary of what happened 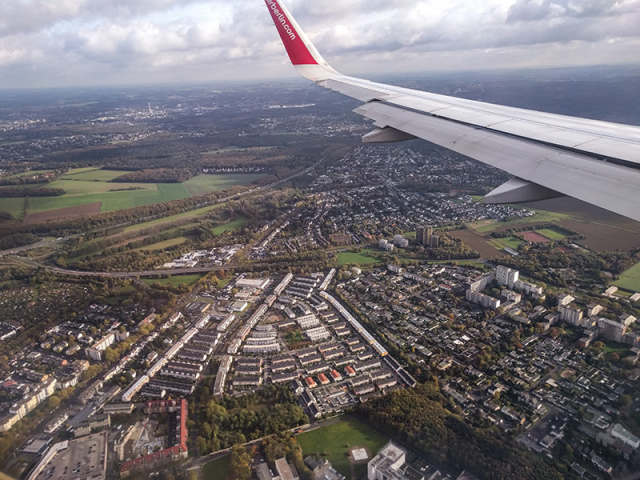 Up up and away! Tschüss Berlin!

We drove to the venue directly from the Cologne Bonn Airport.  As soon as we got there, a friendly looking staff directed us to the parking lot.

QR code in hand, we then proceeded to “check-in”.  Within a minute each of us received our two-day pass on a nice plastic name tag. 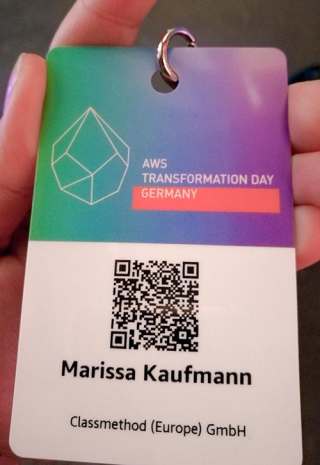 Some very friendly ladies were there to take our coats.  And we were on our way to what ended up being a very educational couple of days. 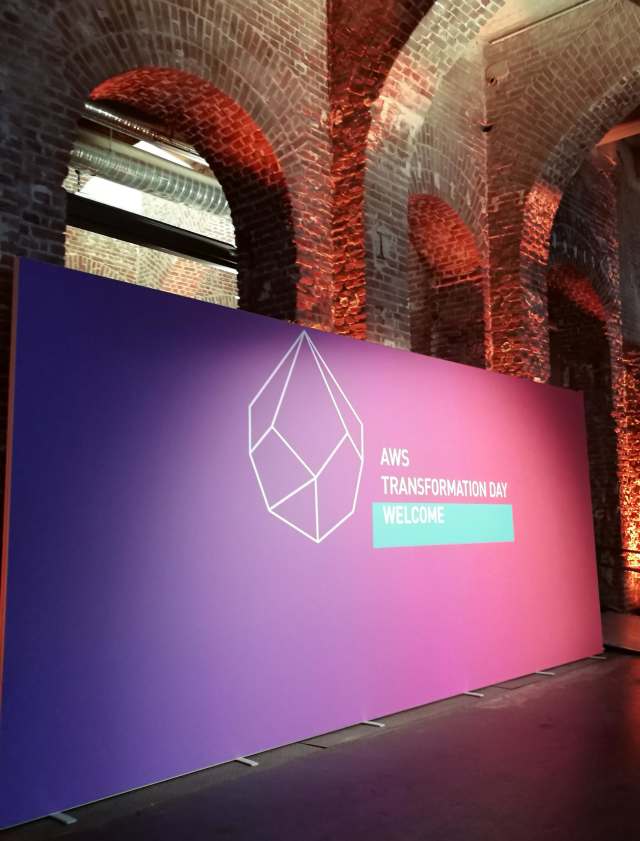 Transformation day was hosted by AWS and various sponsors specifically for AWS partners.  Therefore, the event had a some-what exclusive feel to it.  The two-day event was full of lectures from companies and AWS representatives.  Topics varied from AI and machine learning to personal testimonies from companies that successfully incorporated AWS and greatly improved their business output.  Free lunch was provided along with a never-ending assortment of cold beverages as well as coffee.

The focus of the event, as the name states, was “transformation".

Down to the smallest detail everything was transforming. Even the colors of the brochure from green to purple. 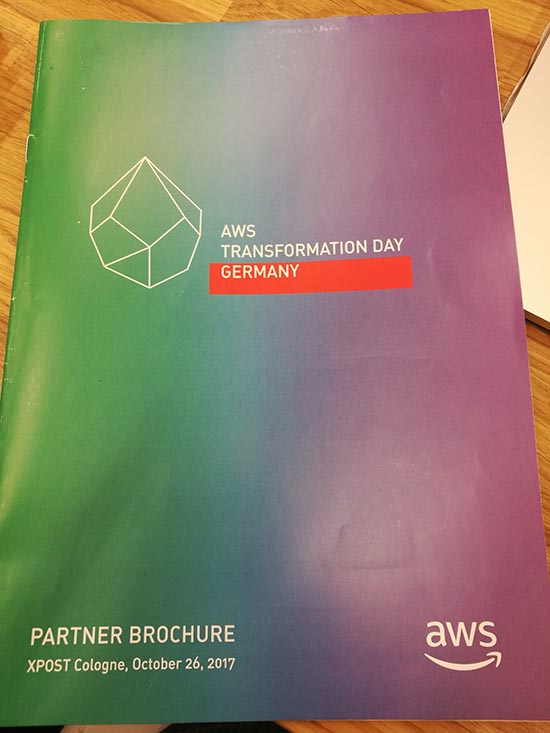 Everything is about "transformation"

To drive this point here is the quote taken from the AWS Transformation Day website is a by Jeff Bezos:

"In business what is dangerous is not to evolve"

Lectures were held in five different halls, or rooms. Attendees had the opportunity to learn how AI technology is transforming, how companies are transforming themselves by adopting AWS into their business frameworks, and how the rules that govern data are also transforming.

The event took place at XPOST

Downstairs has a nice antiquated, or rustic feeling with exposed brick.

Upstairs was very elegant and modern.

XPOST is an event hall, or exhibition hall, not like CeBIT, but definitely huge. 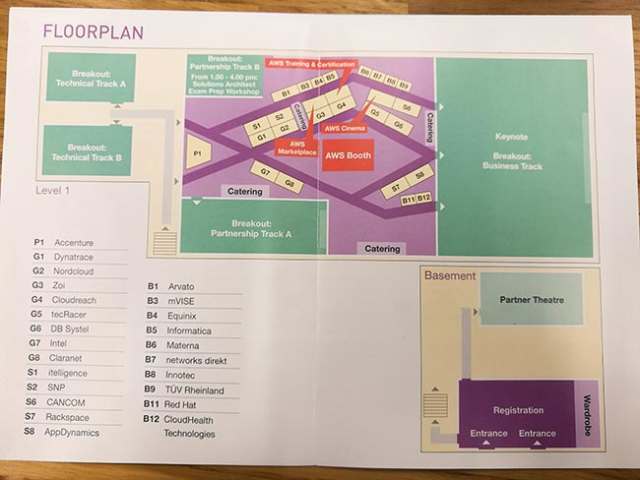 Within the main hall was a giant “aws” centerpiece, with floating lights that “transformed” their colours and overall composition via wires. Around the display was a carpeted lounge area with tables for networking and eating.  There were also couches and coffee tables that created a more “personal" atmosphere.  Surrounding the lounge area were booths from sponsors such as Redhat, Nordcloud just to name a few. 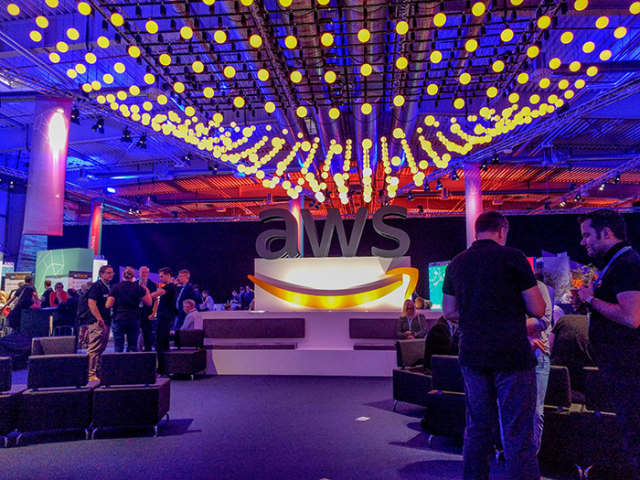 I attended five lectures in total.  I will summarize just a few which I attended, and try to keep all summaries as brief as possible.

which I attended was given by Lee Atkinson titled “Delivering Media and Entertainment using the AWS Cloud”.   Lee Atkinson is an AWS representative from England. His lecture was packed with info-heavy slides, almost impossible to read as Mr. Atkinson sped through them. However the point of the lecture was clear - with the development of streaming and viewer selectivity through “skinny bundles”, the market is in a constant state of change and how media is delivered and consumed by customers must therefore also change.

Mr. Atkinson went into more detailed success stories such as how Netflix is now fully integrated into AWS and thereby able to deliver their content globally by storing and delivering content using AWS global locations.

Mr. Lajos Lange from one of the largest news distributers in Germany called WeltN24 gave a lecture immediately after Mr Atkinson in the same hall.  His talk was more of a personal testimony, or success story.

Mr. Lange gave a very honest and humble account of how the merger of two of Germany’s news publications N24 and Die Welt overcame obstacles when becoming completely a united multi-media news cooperation.

One of the major difficulties he was faced with was the top-down approach that was enforced since the origins of the publishing house. However through perseverance, they managed to convince management that his division needed their own internal IT team.  Their goal was simple enough, to have a cloud-based service platform that supports rapid development.  In order to accomplish this, they needed bottom-up empowerment.  A transformation which did the company a world of good.

Mr. Lange’s presentation did not have as many slides, but it was inspiring to see him speak so candidly on how the company struggled at first, and what methods and strategies they are implementing and are investing into in order to grow and excel at their business.  One strategy was a visit to the United States’ east coast to other news publications to learn from them, including the Washington Post, which he showed pictures.  Another strategy was investing into ways of transforming consumers to loyal fans of their products, and how SaaS has become a part of the company's “DNA”.

It was interesting to learn about how news organisations were handling the latest trends of how people get their news in today's modern age. Mr. Lange's talk was how transformation wasn’t easy at times but necessary and resulted in the greater good for the company. His unabashed style in showing difficulties gave a very intimate feel to his talk. Many people were eager to speak to Mr. Lange afterwards.

The Most Popular Lecture

The lecture which was the most packed out of all the lectures I attended was based around the GDPR - General Data Protection Regulation.

New European data laws - with heavy fines, have companies a little tense in that they need to re-examine and transform, or greatly modify the way they document and collect customer data.  An AWS representative made it clear that AWS is not a substitute or a means to comply with the new laws, but they are enabling tools for companies to make sure that they are in correct compliance with the law.  Failure to comply to GDPR guidelines can carry hefty fines.

One thing which was made explicitly clear was that AWS is not the data controller, at the end of the day, they are the data processor and software provider.

On the second day Christian Petters,  an AWS representative from Germany gave a talk titled “Artificial Intelligence on AWS – Powerful machine learning for developers and data scientists.”  He delivered what the title promised.   Mr. Petters talk started with a brief history of AI within Amazon when it was only an online book seller.   He then began to demonstrate the simplicity of machine learning and AI through effective demos, emphasizing the need for only a few lines of code.  His demos showed the audience examples of MXNET, P2, Polly and Rekognition in action. The demos were very impressive as specific aspects of AI programs can be live tested individually.  For example, Polly which is a text to speech application can be paired with a lexicon in order to provide consistent and proper pronunciation.  A developer can test this and know within seconds if it produces the desired effect.

What I admired most about Mr.Petters talk was how excited he himself was about these products.  It showed that he believed in the capabilities of the products which he spoke of.  He was cheerful,funny, and I not only learned a lot from his lecture but I also enjoyed learning it.

Transformation day was a day to show partners the potential of what AWS can do for you, and how other companies are utilizing AWS to advance.  It was a chance for companies to learn ways to increase their production, to be inspired by the experiences of others as well as gather knowledge of various aws cloud features.  At the end of the day Amazon is one of the ultimate online services.  Everything they do is a service, and far more reaching than anyone could imagine. 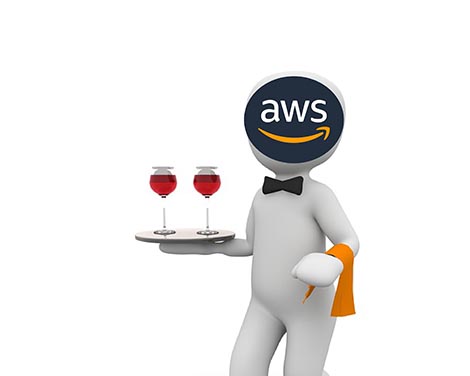