7 Smart Things I Found In A Developed City, Tokyo

Guten Tag! Recently I went to Tokyo on a business trip for Developers.IO 2019 and was amazed with many cool things that went on there. Side note - I'm actually Japanese and had lived in Tokyo for 7 years, so I thought I already knew a lot about Tokyo. But after working in Berlin for Classmethod Europe for two years, I started to see things with fresh eyes. Being high-tech doesn't mean the city is superior to the other city, but I found Tokyo is indeed truly developed especially when it comes to technological facilities. In this article, I'll discuss the things that I found "smart" during my trip to Tokyo.

It's a known fact that Tokyo is one of the busiest cities in the world. I suppose that trains which are filled with ads made me feel like it's even busier. In Europe, you find different ads and notices in stations and trains. Some trains in Berlin have small monitors which display ads and news, and some newer cars even started installing big monitors by the door, which show the next few train stops and connections. (But they're still unsteady and sometimes unreliable!) 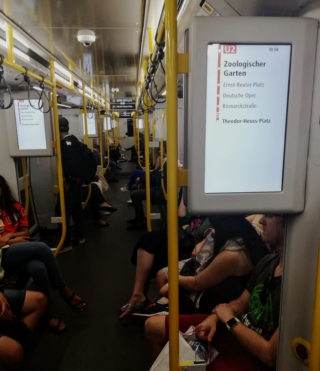 In Tokyo, once you get on a train, you can hardly avoid seeing various ads and notices. As you can see in the following image, there are many digital/paper ads everywhere. This is I guess, the latest model of a train, that runs on the Yamanote Line. Here you see five different monitors in just a small section of the train. The left three are used for commercials, which could display three different ads, or one wide ad separated into three sections, as seen in this photo. Of course, one of the monitors above the door displays the next stop as well as the whole route, it also tells you which side of the door opens next and where you'll find stairs and escalators on the platform of the next stop. 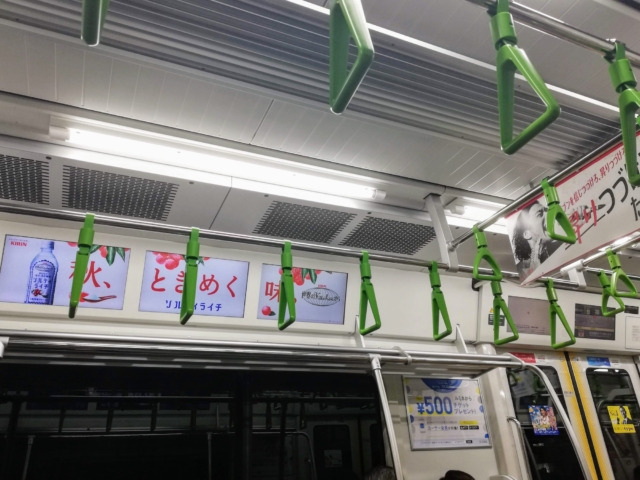 It's a lot of information for your eyes, but you probably won't get bored.

A train isn't the only transportation which has monitors. Some elevators, mostly the ones installed in offices or residential skyscrapers, also have a monitor to show news and commercials for the little moments of your trip to the next floor. The following photo is taken in Tokyo Nihonbashi Tower, which was the venue of our recent event Dev.IO. It's a 35-story building, with 4 sub-floors underground. This sounds like it can be one of the highest buildings, but surprisingly, this height of skyscraper is not extraordinary for the area. 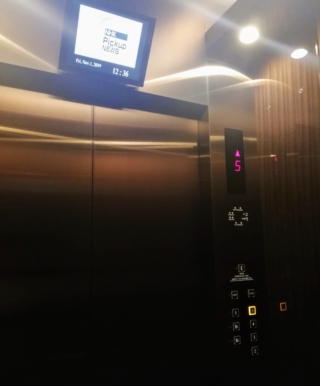 By the way, with or without a monitor, it's a common function in many elevators to cancel the chosen floor if you push the wrong button by mistake. You can do so by double-tapping the chosen button.

In Europe I don't see many vending machines, but in Japan they're very common and could be found everywhere. The latest model of a vending machine has a very big digital screen in place of a clear glass. I've seen them in many large stations around Tokyo. 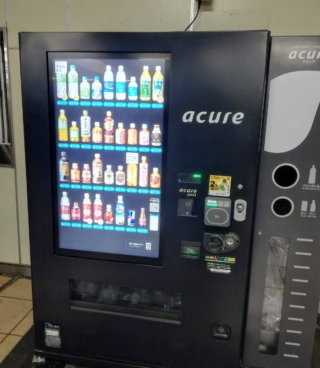 Basically, products are lined up neatly, and displayed on the screen as seen in the photo. It looks the same as usual vending machines. However, this new model, called acure, sometimes shows suggestions, such as "This coffee has no sugar and is flavorful!" or "These refreshing drinks are well chilled." Furthermore, when nobody stands in front of it, (or stands without ordering for a while) it will show the weather forecast for the day or short ads, occupying only a part of the display while still remaining recognizable as a vending machine. Although cash is accepted, it's quite popular to shop using a prepaid e-money Suica card in stations, including at these vending machines. It seems you can even pay using your mobile device by installing an app and registering your credit card, but this method is not yet the standard by Japanese.

Another thing I found "smart" was in the Tokyo central station. Almost a million passengers use this enormous station every day. Not only because it's connected to so many lines, but also because it's the terminal stop of the Shinkansen (bullet trains), so luggage lockers are in high demand. There are a lot of luggage lockers in different locations of this huge station, so you should take advantage of this locker finder to save your time. 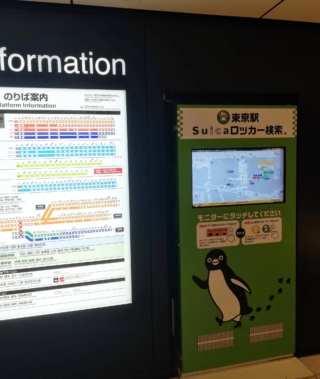 First you select the size of your luggage (S, M or L) at the bottom left of the screen, then choose the floor at the bottom right of the screen, and then you can see the number of available lockers in each location on the map. This is such a kind service, but seemingly it supports only the Japanese language. Good news though, some of the info is written in English as well! I hope it will fully support English (and ideally other languages) in the future.

This is not a technology related, but more about the ordering system at an Udon restaurant. This was actually the first thing that impressed me on this trip. This is how one typically places an order in this restaurant;
1) order and instantly receive Udon,
2) add optional toppings if you want,
3) pay at a cashier while the rest of your order (in this case, rice and Natto) is served, and then 4) add as much soup of Udon as you want.
You achieve these four steps in one line very efficiently. Additionally, you can add other small toppings and take water or tea for free anytime by yourself. 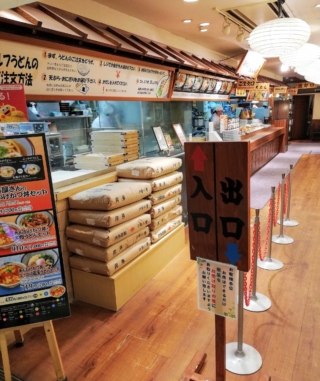 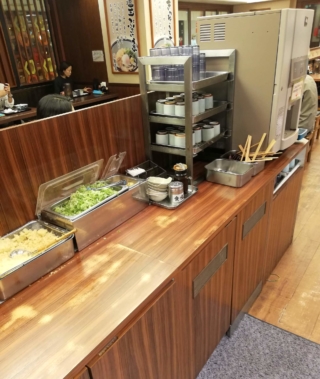 As a result of this efficiency, it took, in my case I guess, only two minutes for the whole procedure. By the way, I'm very satisfied with the quality and amount of this Udon, as well as the price, just 3,60 EUR! 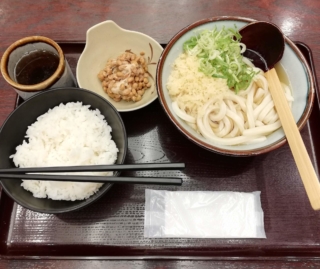 Japanese toilets might already be quite famous for their cleanliness around the world. I have found some toilets in Germany, where it cleans a seat by itself every time after flushing. A cleaning mechanism comes forward to cover a part of the seat, and then the seat turns around, which I thought was also innovative. I've never seen such a function on Japanese ones. However in Japan, you can experience the following popular features on many toilets: 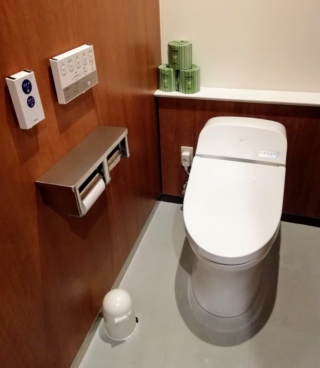 You can find out more about the elaborate features and the history at Toilets in Japan (Wikipedia).

As I like to stay in a capsule hotel, I stayed in several during this trip. Not only is it cheaper than a regular hotel, it has more privacy than a hostel, but also it usually has better facilities than a hotel!

The following photo is the First Class Cabin of First Cabin, which has more space than a common room (cabin) of capsule hotels. As you can see, there are hangers, a table, a mirror, a secure locker under a semi-double bed, and TV. You are provided with towels, sleeping wear, slippers, a toothbrush, and a body towel in your cabin every day (which I thought was a bit excessive).

My favorite part of this capsule hotel was their public bath. (Shower rooms were also available.) In a shared powder room, you can have a hairdryer, a hair curling/straightening iron, cleansing oil, cotton pads etc. available to you. All these amenities are supplied in each seat. 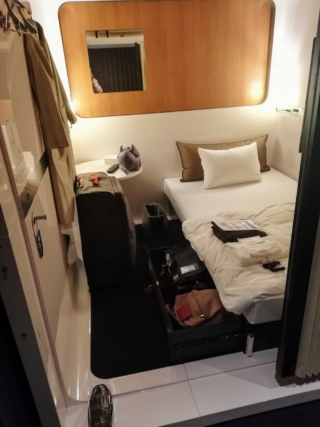 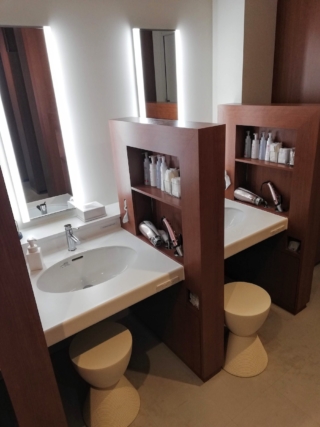 This washing machine surprised me because you don't need to put detergent in it, and it does washing and drying automatically in an hour and half. (There was also instructions in English and other languages.) 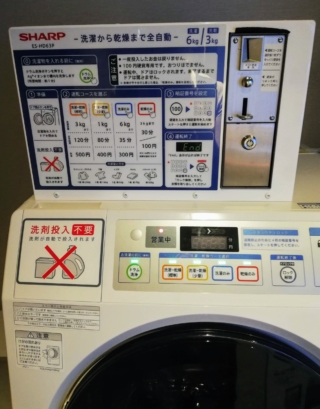 In a female-only capsule hotel Centurion Cabin & Spa, they even had a sauna, facial steamers, and a foot spa available for free. A foot spa is actually not made of water but small warmed capsules, so it's safe to use a computer while you relax your feet for a pleasant remote work experience! 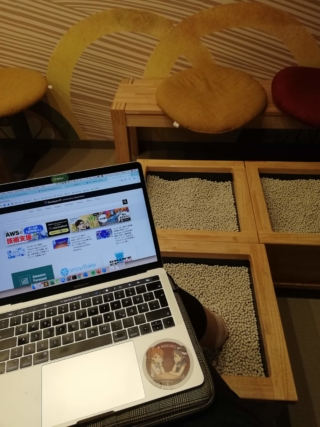 I previously wrote an article about Yokota de Go, which uses the system of a cashierless store just like Amazon Go. It had been internally developed and led by our CEO Satoshi Yokota. The store which this system is installed in, now physically exists in Akihabara! (It's still being developed and upgraded day by day.)

Before trying out the cashierless shopping in the cafe, I tried the cashierless ordering using mobile for lunch. It works by using the official web app or LINE (the common SMS App in Japan like Whatsapp). You first need to sign up with your email address and register a credit card. Then, all you need to do is choose what you want to order in a menu! 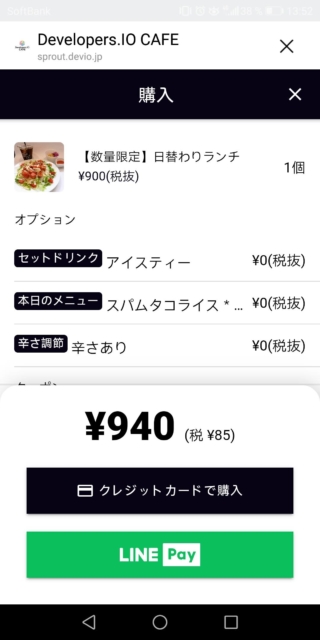 You'll get a notification when your order is ready in the cafe, so you can save time if you place your order in advance. When you arrive in the cafe, you can have whichever seat you want. The cafe is located by the river, so it's a nice place to work remotely. (Of course, Wifi is available.) 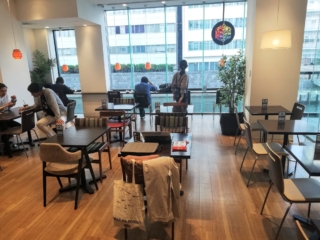 I thought the price of the lunch menu was not cheap, considering the area, but the quality of the food was actually quite good and was very satisfying for me. 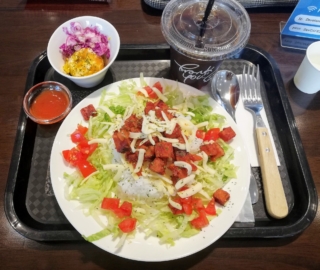 The cashierless shop is placed in a different part of the cafe. You just open the web app and show a QR code at the entrance of the shopping space. Then, walk in, take whatever you want, and walk away. There are an entrance and an exit, but there are no gates. 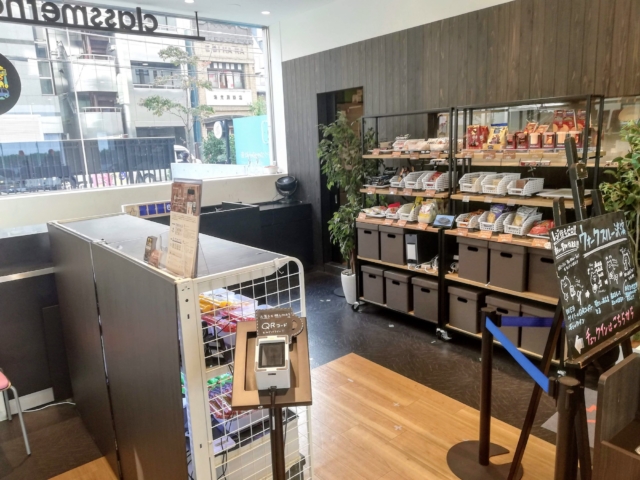 Prices of the snacks were not that expensive. 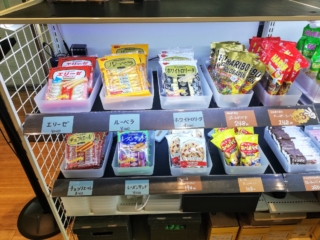 As this was my first time to shop here, I still felt nervous, like "Am I not stealing anything?" But then you'll immediately receive a notification from the web app as well as a receipt sent via email. So you can confirm you didn't steal anything unintentionally, or that you're not being overcharged. 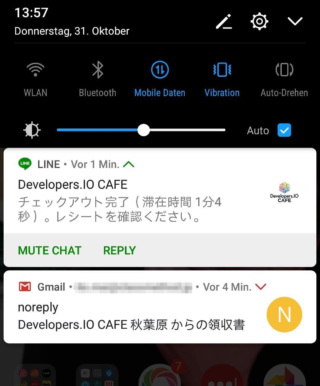 Unfortunately, both the web app and instructions in the cafe don't currently support English, so please bring your Japanese friend to try this latest technology!

I was so impressed with these smart things in addition to the cleanliness of the city, exquisite foods, and the quality of services. However, while there are many pros, there are always cons. It can be quite famous around the world, but commuting in Tokyo is hectic and nobody likes it. I definitely felt more stressed commuting in Tokyo than in Berlin. Also, I found it sad that many convenience stores give you too many plastic bags, which are easily thrown away. It's important to remember that even though it may have these cool things, it doesn't always mean that Tokyo is the best city in the world!

For your next trip, I hope you can enjoy not only Japanese traditional cultures but also these high-tech parts of Japan!